The history of Lucedio, the ‘grange’, the rice

A document of 1126 testifies that Ranieri, the marquis of Monferrato, together with his cousins Ardizzone and Bernardo, donated some land, including the area on which the monastery is built, to the “monasterio Sanctae Dei Genitricis et Virginis Mariae located in Lucedii […]". The same marquises also allowed their timber to be used to build the monastery, and some members of the family were buried in Lucedio.

Thanks to important donations in the Vercelli area and also in more distant territories, such as the Pavia, Ivrea and Turin areas and the Susa Valley, the monastery took on significant importance.

As for other monasteries, the second half of the fourteenth century was probably a period of crisis for Lucedio.
In 1457 pope Callisto III established the commendam and Lucedio was given the status of a parish. There were frequent episodes of conflict between the abbot who was the head of the monastery, and the commendatory abbot, often not in residence. The marquises of Monferrato remained the patrons of the abbey until1707, even if in commendam it was also held by other families.

The Sixteenth century was a prosperous period for the abbey. In Descrittione di tutta Italia Leandro Alberti wrote: “… S. Maria di Locedo, was once a noble monastery, built by the Marquises of Monferrato. It used to be inhabited by many monks who served God, but now only a few live there together with mercenaries; because it is in commendam, the sumptuous ancient buildings which are gradually going to ruin, are proof of the veneration there once was " (ALBERTI 1568, II, f. 453)

In 1607 pope Paul V tried to provide greater protection for the abbey by making it part of the Province of Lombardy of the Cistercian Congregation of Saint Bernard, but the measure had little effect. In 1631 the abbey territory became part of the recently established Province of Trino, separated from the Duchy of Monferrato, and passed under the control of the Dukes of Savoy. At the end of the Seventeenth century only ten monks remained.

The secularisation of the abbey of Lucedio

In 1784 the abbey was secularised. With secularisation, the assets were given in commendam to the Order of Saints Maurizio and Lazzaro – a commendam which, as the result of an agreement between Vittorio Amedeo III and Pope Pius VI, was passed to the Duke of Aosta, the future Vittorio Emanuele I -, except for the grange at Lucedio, which remained part of the monastic community until 1776, the year when the site was handed over to the Maurizian Order following payment of an annual sum of L. 16,000. During the same year the monks were transferred to the vacant college of the Jesuits in Castelnuovo Scrivia.

In 1800, under French rule, the former abbey and its assets – except for the estates of Gazzo and Pobietto, which remained the property of the Maurizian Order until 1854 – were confiscated and became part of state property: it was then transferred to the Conservative Senate and then to the Cassa di Ammortamento. In the meantime, Lucedio was rented out: in compliance with the 26 nevoso IX act (16 January 1801) the State domain rented out the estate to the Società Camosso & C. until 1806; after this, it was rented out to a company under the management of Luigi Festa, owned by Giuseppe Gattinara and Marco Antonio Olivero.

With a decree of the Emperor Napoleon of 27 September 1807 the whole estate, together with 3 million in cash and 300,000 francs of income, became the property of Napoleon’s brother-in-law, prince Camillo Borghese, as payment for a quarter of the art collection kept in Villa Borghese in Roma, which was transported to the Louvre. According to what was reported in a document of 1814 – the Compendium, by Benedetto Brunati, a royal engineer, concerning the history of Lucedio from closure of the monastery until it was put into the hand of Prince Borghese – the new owner improved the condition of the estate, although the living conditions of the inhabitants still remained extremely difficult: the winter frosts, the water from the rice fields, the type of work and bad diet of the peasants caused malaria and tuberculosis.

Lucedio from restoration to our days

With the Restoration, on 30th June 1815, the Savoy government seized the estate since it did not recognise the rights of Prince Borghese. Prince Borghese made a complaint through the secretary of the papal State. Vittorio Emanuele objected through his own lawyers, but an arbitration verdict sided with Prince Borghese since the estate had been transferred without any payment. The Savoy family started negotiations to obtain Lucedio making a monetary offer. Borghese, however, asked that, first of all, the seizure order on the assets should be removed and, about a year and a half after the seizure, he once again took possession of Lucedio.

In 1818, Borghese, who intended managing the estate through his own administrator cav. Evasio Gozzani di San Giorgio, and who, in the meantime could not find a satisfying economic agreement for its sale, sold the property to a company composed of the Marquises Michele Benso di Cavour (a former administrator of Lucedio on behalf of Borghese) and Carlo Giovanni Gozzani di San Giorgio e da Luigi Festa.

The three purchasers of Lucedio, which had a surface area of over 3,000 hectares, divided into seven ‘granges’ or main estates – Lucedio, Montarucco, Leri, Castelmerlino, Darola, Montarolo and Ramezzana, as well as five farm houses – became the owners on 1st December 1818, with a contract stipulated in Turin by Notary Felice Ferreri. 12/24 of the property was owned by Marquis Gozzani, 6/24 by Marquis Cavour and 6/24 by Luigi Festa. In 1821 the property was divided among the purchasers, and after drawing lots, two parcels of the estate were assigned to Marquis Gozzani, one of which included the Lucedio grange.

A few years later the company was wound up. Marquis Gozzani di San Giorgio then bequeathed the grange of Lucedio and Montarolo to his nephew Felice Carlo who, in 1861, due to his gambling debts, transferred the property to the Genoese Raffaele de Ferrari, Duke of Galliera.
With royal decree of 1875, Vittorio Emanuele II granted the duke the title of prince for his services rendered to the homeland, and the son of Duke De Ferrari gave up the title and gave the property to his cousin, Marquis Andrea Carrega Bertolini, whom the king allowed to keep the title of prince. The current name of ‘Principality of Lucedio’, which still appears over the doorway of the estate, derives from the events of this period. In Genoa, references can be found to the property of this period in the names of the railway stations: ‘Principe’ station is an abbreviation of ‘Principe di Lucedio’, and Brignole is the surname of the wife of Raffaele De Ferrari, Maria Brigole Sale. In 1937, Count Cavalli di Olivola, a descendent of one of the daughters of Felice Carlo Gozzani, purchased the property again. His daughter, Countess Rosetta Clara Cavalli d’Olivola Salvadori di Wiesenhoff, is the current owner.

The Cistercian monks interpreted the Benedictine rule by giving considerable importance to work and preferred to manage the land which had been recovered from forests and bogs themselves. They created ‘granges’, buildings which initially were supposed to be used almost only for storing grain. ‘Grange’ derives from the Latin ‘granica’, ‘grain store’. These buildings were then further developed, equipped as cowsheds, accommodation for lay brothers, shepherds and farmworkers:
The current grange structures have been considerably modified: some contain small churches from the Baroque period and many were renovated and modified during the Nineteenth and Twentieth centuries.

The spread of rice growing in Piedmont

The spread of rice growing in Piedmont was the result of the building of canals, such as the Naviglio d’Ivrea and the Canale del Rotto, commissioned at the beginning of the XV century by the Marquises of Monferrato, who rerouted the river Dora Baltea to provide the water needed to flood the rice fields. In 1635, Monsignor Francesco Agostino della Chiesa, in his ‘Report on the state of Piedmont’ talked about rice-growing in the Vercelli area and in 1710, in the Piedmont of Vittorio Amedeo II, 9% of the area of the plain was dedicated to growing rice; the percentage increased during the XVIII and XIX centuries.

During the Nineteenth century, Piedmontese rice and more in general Italian rice started to be exported. It was much sought after by the French, Swiss, Germans and Austrians, and production also increased thanks to the construction of the Cavour canal.

Rice and the ‘monda’

During the Twentieth century, the Vercelli rice fields were also the site of conflicts to improve working conditions. Between the end of the Nineteenth and the beginning of the Twentieth century, every year, during the period when the fields were flooded – from the end of April to the beginning of June to protect the delicate rice plants from the difference in temperature between night and day – thousands of women used to come to the rice fields from the areas of Vercelli and Novara, where local labour was not sufficient. The work consisted in transplanting the little plants (trapiantè, in Piedmontese dialect) and pulling out the weeds which infested the rice fields, suffocating the normal growth of the rice (known as the monda, mundè).

For the monda, bent double with their hands and feet in the water, the women pulled out the weeds walking one alongside the other.
When transplanting, however, – still walking alongside each other – the women would plant the little rice plants in the ground with their fingers under water but walking backwards. Due to the heat, damp conditions and the presence of insects, working conditions used to be the cause of industrial illnesses such as rheumatism and malaria. What is more, women were paid less than men.

When the Trade Union Centres were set up at the beginning of the twentieth century and the first farm labourers’ strikes took place, about 130,000 were working in the rice fields, two thirds of whom were women. The “mondine" (women working in the rice fields) were in the front line in leading the protest for improving unfair working conditions. During the twentieth century, the use of weed-killers meant that the monda was no longer necessary.

At the beginning of the XII century the Vercelli plain north of the Po was mainly covered by woods, scrubland, moorland and marshes.
The landscape, therefore, was very different from what we can see today. The Cistercians probably reared pigs at the beginning. They then went on to rear sheep on a vast scale – grazing permits speak of flocks, each of more than six hundred sheep – for which it was necessary to create space by clearing the woods and other ground unsuitable for grazing. At the beginning, rice was probably planted in the cloisters for medicinal purposes; then the monks realised that it also grew well in open fields. Perhaps, already in the fourteenth century, hundreds of hectares of rice were being grown.

Today “Principato di Lucedio" is a farm covering more than 500 hectares. The architectural complex of the Abbey is part of the Bosco delle Sorti della Partecipanza, the Regional Park of Piedmont which protects one of the few remaining lowland forests. The rice production process at Principato di Lucedio has a low environmental impact and the way it is packed, without preservatives in a modified atmosphere, guarantees products with very high nutritional qualities. Among the varieties grown we can find Carnaroli and Arborio, typically used to prepare risottos, and more modern varieties such as Selenio, used to prepare Sushi. 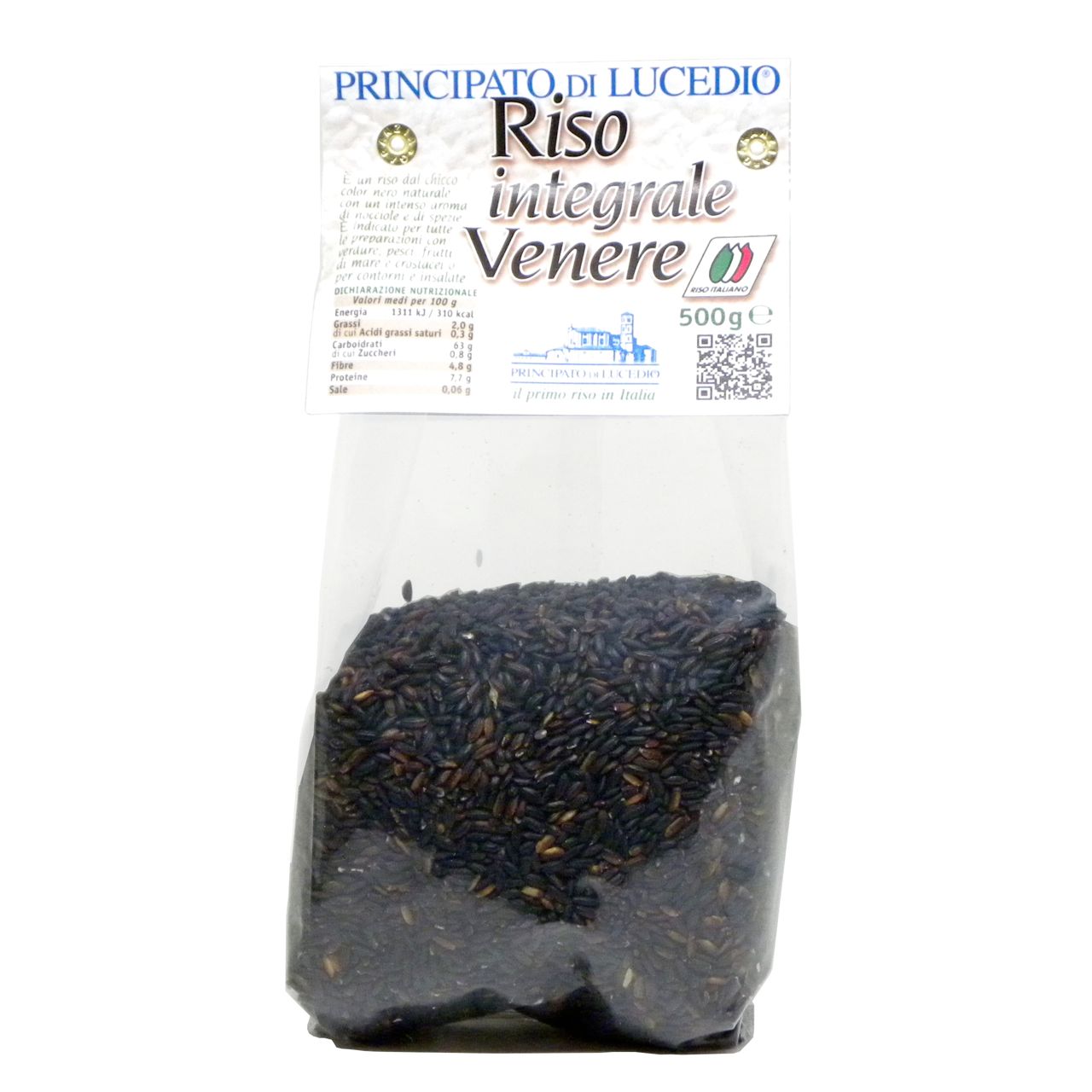 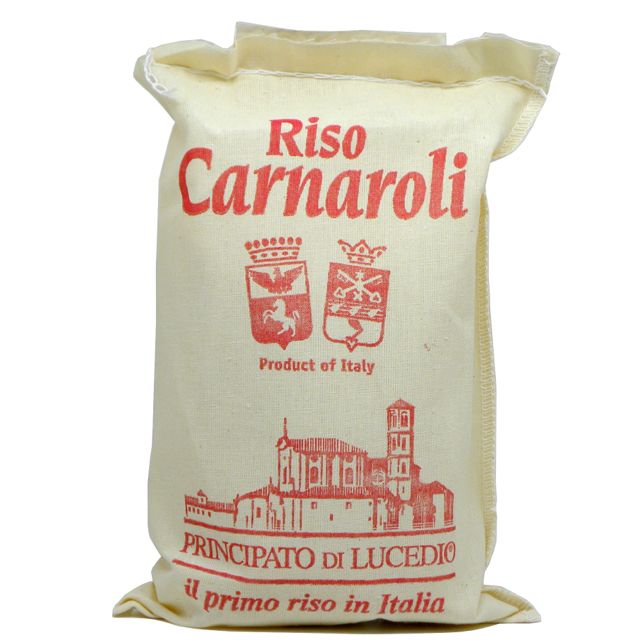 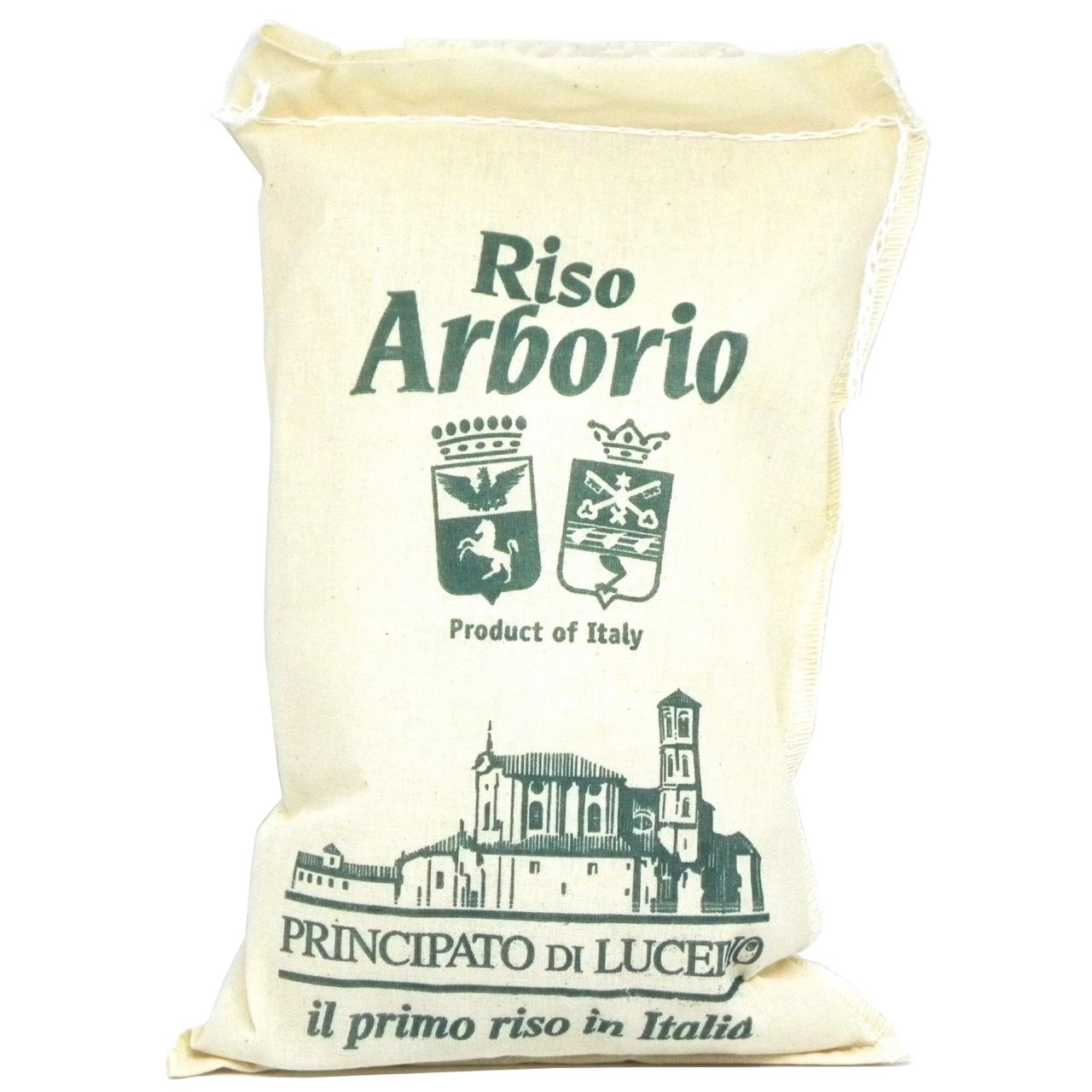 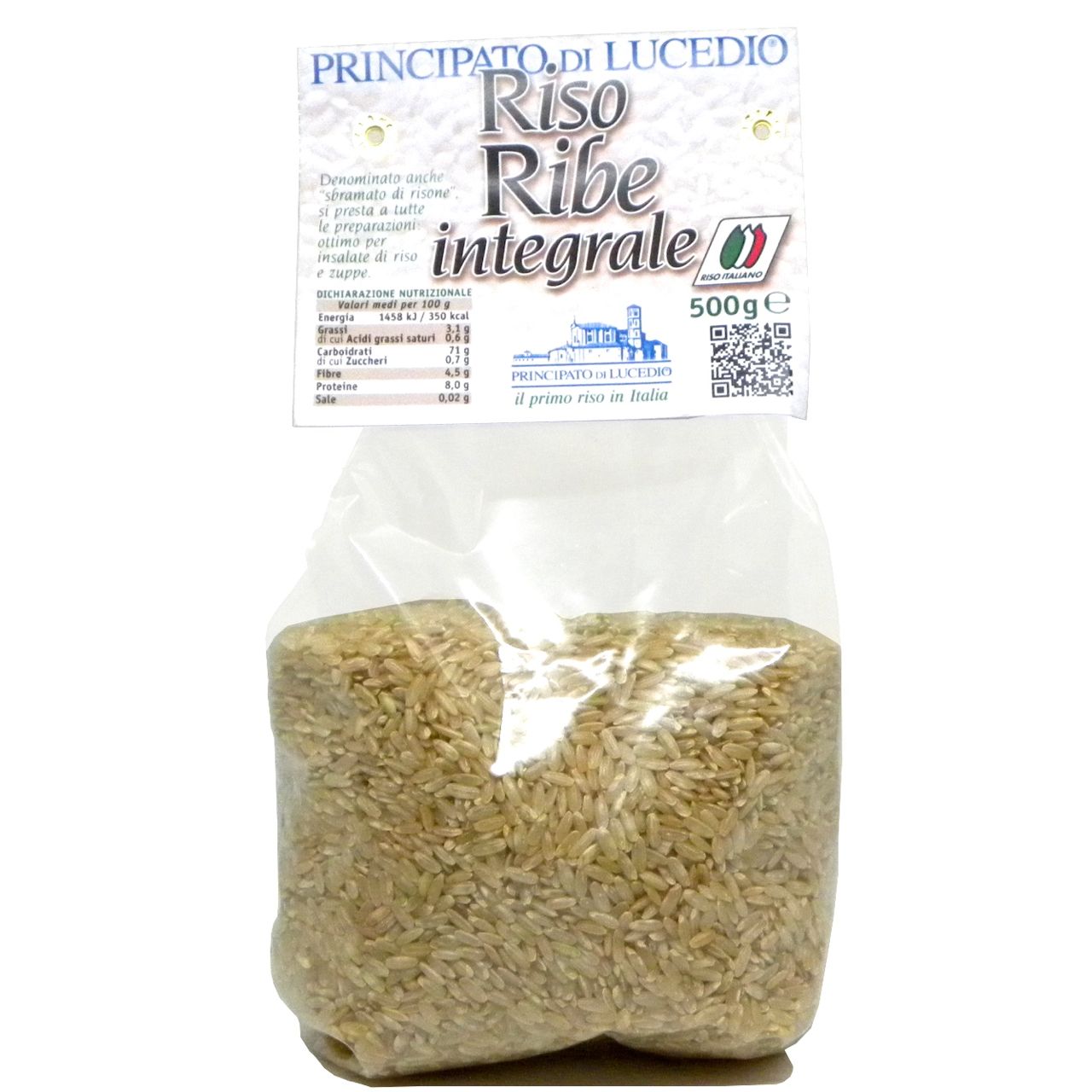