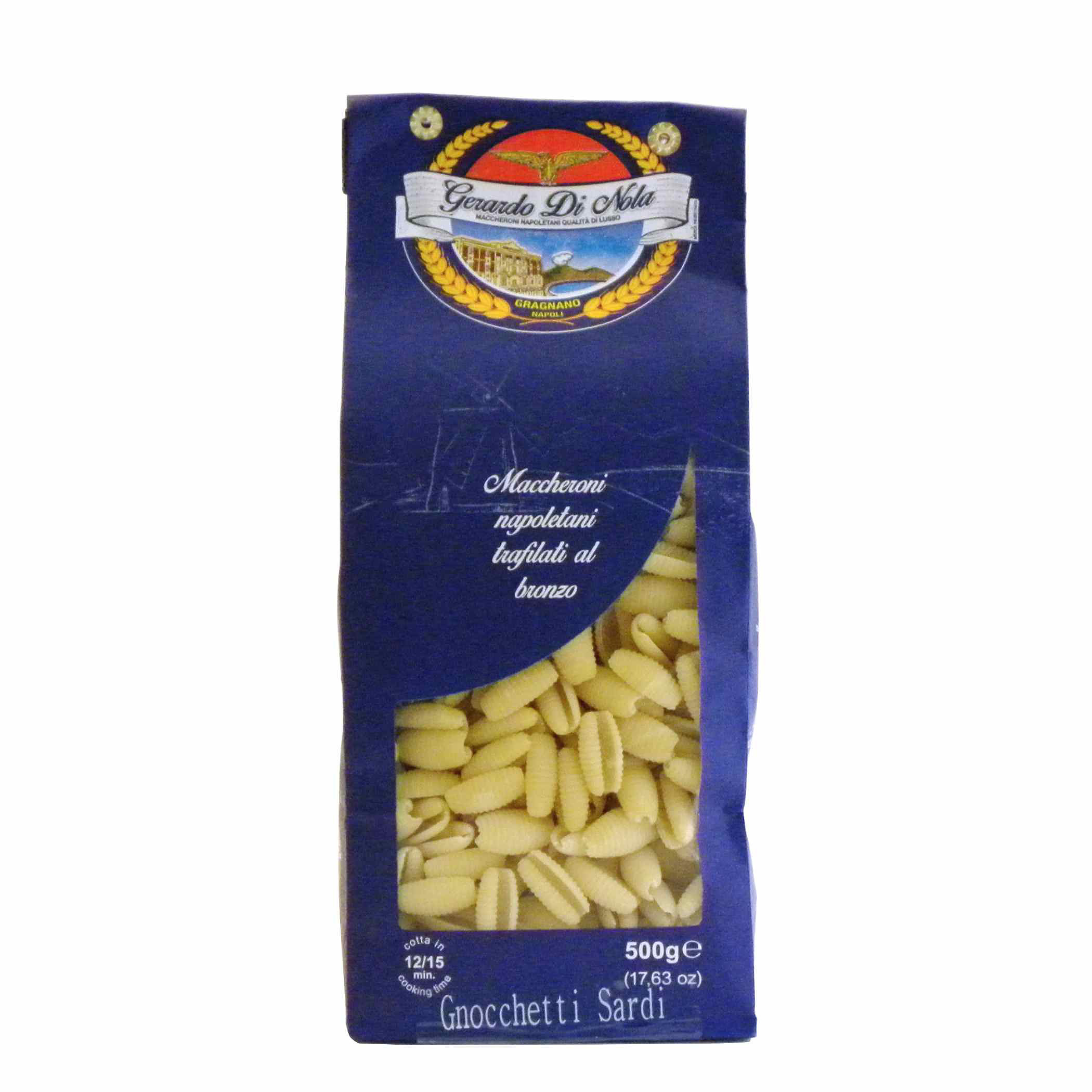 The Gnocchetti Sardi are made in Gragnano exclusively with Italian durum wheat semolina and water from the local aquifer.
The slow drying method preserves the organoleptic properties of the ingredients.

The Gnocchetti Sardi are a typical dish of the Sardinian cuisine. Their original Sardinian name depends on the area: they are called Malloreddus, Cigiones or Ciciones, Macarones caidos, Macarones de punzu.
Their shape is similar to a shell, and they can be eaten with many sauces.

GERARDO DI NOLA: AT THE VERY HEART OF PASTA

July 12th 1845 is an important date in the history of the fame of Gragnano as the homeland of pasta. That day, during a lunch, the King of the Kingdom of Naples, Ferdinand II of Bourbon, granted to the pasta producers of Gragnano the high privilege of providing the court of any long pasta. Since then Gragnano became the City of Macaron.

The pasta factory Gerardo di Nola was born in Gragnano in the 70s of the 19th century. In the 30s of the 20th century, the company moved its headquarters to Castellammare di Stabia, where it remained until 1995, always producing pasta of great quality.
Today the pasta factory has moved back to Gragnano, with the aim to continue the journey giving even more luster to artisan pasta and to this historical company, which over time evolved into a right mix of past, present and future.

The pasta Gerardo di Nola is made in respect of tradition and with love.
It is made exclusively with Italian durum wheat semolina, provided by selected partners, mixed with water from the local aquifer. Water is in fact one of the determining factors for the taste of Gragnano’s pasta and that’s why Gerardo di Nola uses only the water that flows from the sources of Monte Faito, poor of limestone, which gives pasta unique features.
Gerardo di Nola uses bronze dies that shape the dough through keyholes and make it rough and porous at the right point, with a lively and full-bodied texture, perfect to receive and enhance sauces and seasonings.
The drying method – one of the most important steps of the production – is low-temperature and slow, taking from 15 to 24 hours depending on the cuts, to preserve the organoleptic properties of the ingredients.
The short pasta are dried on wooden frames, while the long ones are arranged in static cells, on rods and then on trolleys.
The packaging is elegant and strictly manual.

This website uses cookies to improve your experience while you navigate through the website. Out of these, the cookies that are categorized as necessary are stored on your browser as they are essential for the working of basic functionalities of the website. We also use third-party cookies that help us analyze and understand how you use this website. These cookies will be stored in your browser only with your consent. You also have the option to opt-out of these cookies. But opting out of some of these cookies may affect your browsing experience.
Necessary Always Enabled

Any cookies that may not be particularly necessary for the website to function and is used specifically to collect user personal data via analytics, ads, other embedded contents are termed as non-necessary cookies. It is mandatory to procure user consent prior to running these cookies on your website.