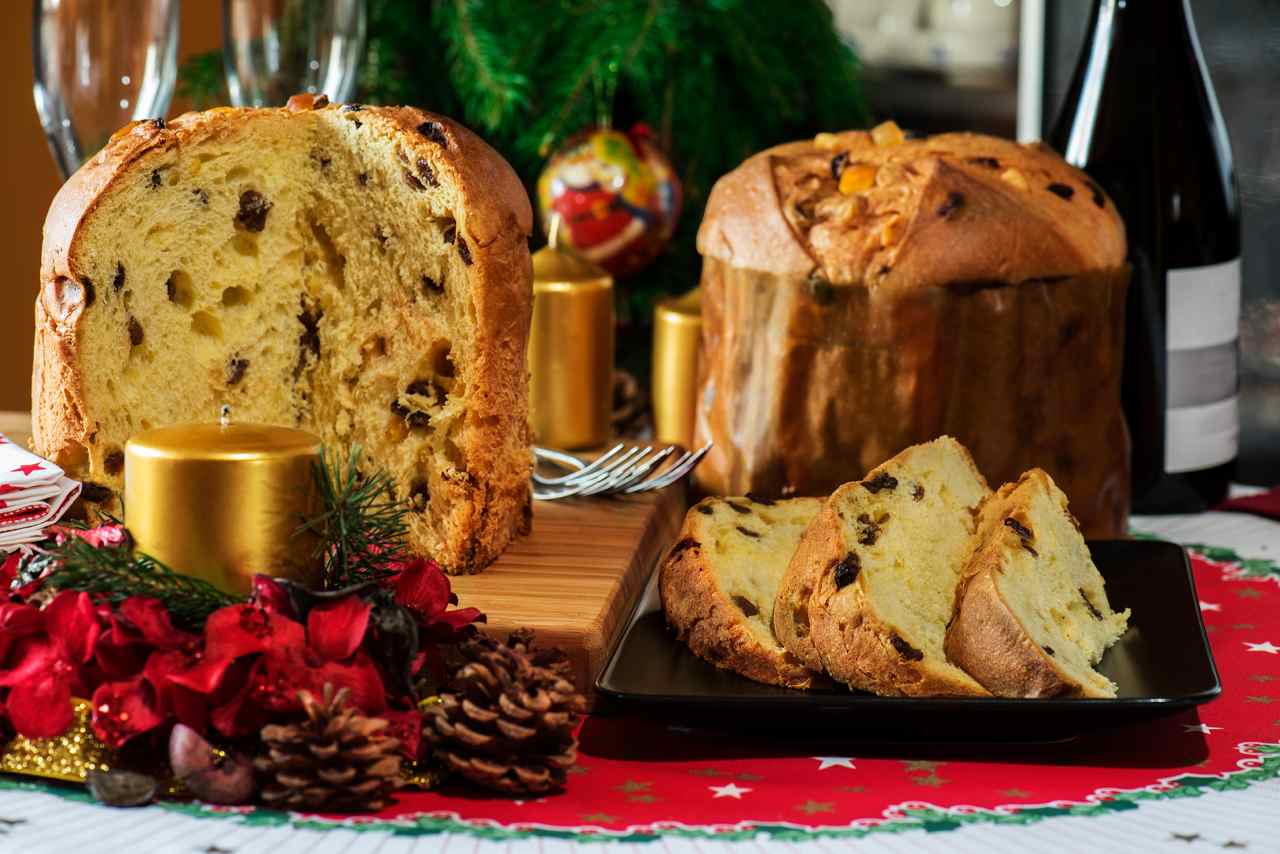 Panettone is Italy’s most celebrated sweet Italian bread, and is traditionally prepared and enjoyed at Christmas and New Year. It is fluffy and bouncy, and when prepared correctly, the best panettone cake should feel like chewing on sweet clouds. While Panettone is of course from Milan, we eat it all over Italy, and in fact it so delicious that countries as far away as Brazil and Argentina also have adopted panettone cake for their Christmas dinners. Good panettone is very versatile; it can be enjoyed traditionally, as a heart-warming snack, or even played with creatively to make delicious desserts such as panettone bread pudding. Of course how and when you decide to eat your panettone is up to you, but always make sure to buy the best quality product, and accompany it with a good swig of sweet wine!

What is panettone exactly? It is Italy’s cherished Christmas cake, with a signature cupola shape that extends usually about 15cm high. It has a long leavening time that provides the distinctive fluffy texture, and we typically flavour it with candied citron, lemon zest, and orange, and often dry raisins. While this is the most typical panettone recipe, more and more varieties keep being created, such as panettone chocolate, panettone bread pudding, panettone bread and butter pudding, and even vegan panettone.

How to recognise the best Panettone

Artisan producers of the best panettone follow some fundamental principles for every loaf they make. Firstly, it is critical to use natural yeast (also known as acid leaven, mother dough or sourdough) in the base. And secondly, as with all good things Italian, one must use only the finest raw materials and ingredients, and be certain to never use any synthetic aromas or enhancers.

The most important ingredient is the natural yeast. Unfortunately for the average consumer, most panettone is made using brewer’s yeast, which has become popular due to its fast processing and short production times. However it does not produce the lactic bacteria that natural leavening does, which in turn break down dough proteins to simple amino acids, making the dough both healthier and much more delicious.

The casual panettone connoisseur will know the best panettone from an average one by the colour of the crust and the internal texture. Brewer’s yeast contains only one strain of microorganism, so produces the same amount of carbon dioxide, ensuring a perfectly even texture. However the beautifully imperfect and irregular internal texture of ancient Panettone can only be achieved using natural leavening, and results in a much more exciting and pleasing sensation in the mouth. Another effect of natural leavening is the darker crust, as the free amino acids (created by the natural leavening) react with the sugars during the cooking process.

At the start of the 20th century, there were two Milanese bakers who sudden saw the potential for panettone cake and decide to produce panettone in large quantities across Italy. First there was Angelo Motta who produced his wonderful brand of panettone cake. He changed it completely by introducing the tall and domed shape that has since become the staple. This was achieved by allowing the panettone bread to rise three times, over a period of almost 20 hours. This is the secret to making the best panettone. Gioacchino Alemagna then also latched onto this method six years later, and created a brand with his name that is still around now. The competition between these bakers to make the best panettone was wonderful for the Italian country, and it eventually led to industrial production of panettone cake so it could be enjoyed by all.

Immigrants from Lombardy in Argentina and Brazil brought their passion for panettone cake with them and revolutionised the Latin American Christmas culture. They showed them how to eat panettone, and even adapted the cake to the local ingredients by using candied papaya instead of lemon and citron. Brazil has since become a large manufacturer of panettone cake.

However the leading producer of panettone is still of course Italy. The leading manufacturers produce 117 million panettone and pandoro cakes every Christmas, generating over 579 million euros. It is still enjoyed and savoured on a small scale too, where a prize for the best traditional panettone of Italy is held in Milan every year since 2013. In 2016, a Southern Italian from Salento won the prize for his fantastic panettone recipe.

Despite its long history, panettone has only been popular in the UK since 2011.

There are many ways to know when it’s Christmas in Italy; there are the bustling markets, the Christmas trees, and the sparkling lights. Yet most distinctively you can see the walls of panettone cake that begin to fill the windows of the Italian bakeries. To get the best panettone, Italians will buy it from small artisan producers, or even reserve in advance from their favourite bakers, and request their favourite panettone recipe. he panettone will then be enjoyed at the end of the Christmas meal, and accompanied by a hot beverage, or a lovely sweet wine.