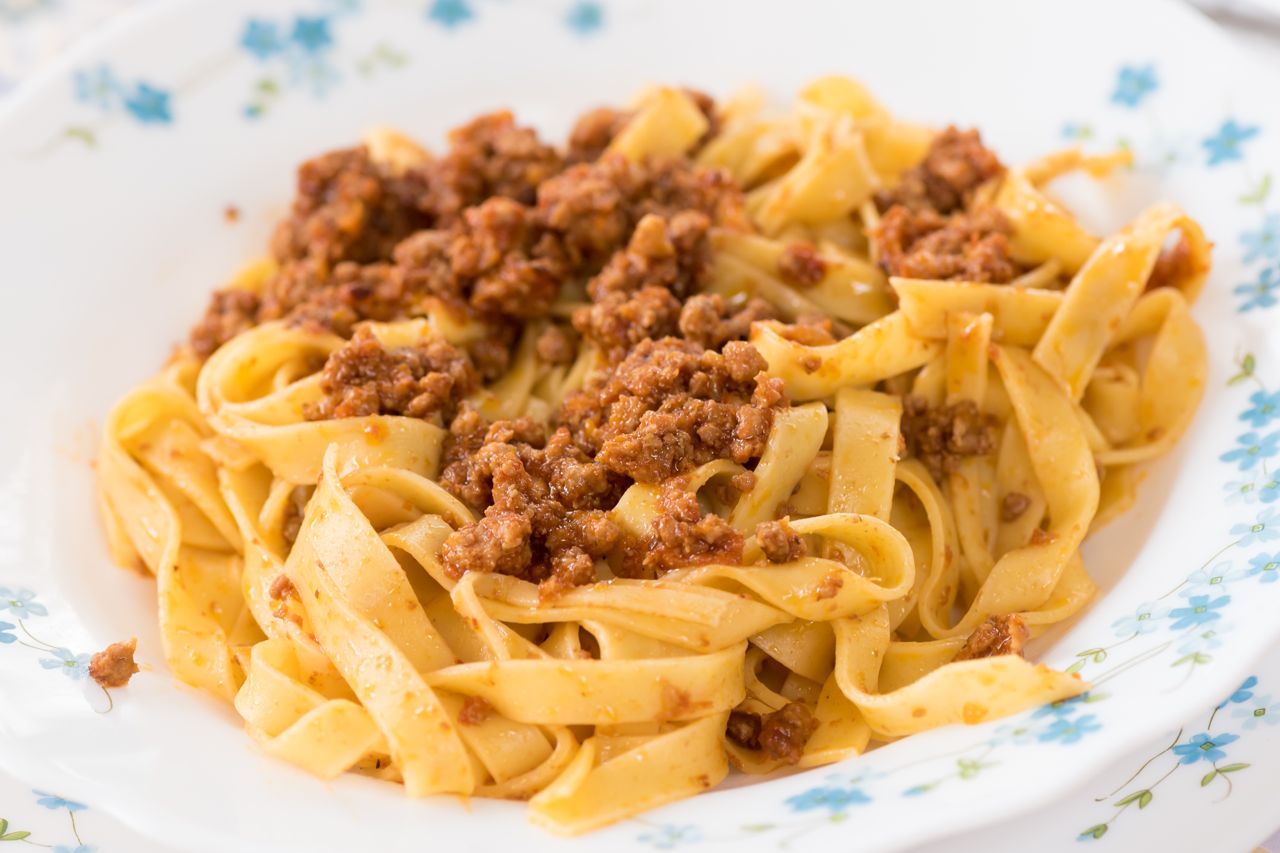 The Most Authentic Bolognese Recipe in Italy:

And there you have it!

In that line above we showed you the most authentic Italian bolognese recipe in Italy.

This is because in Italy there is no such thing as ‘Bolognese’ sauce and therefore a bolognese recipe simply doesn’t exist.

However, if you step away from the centre and wind your way up to into the back alleys, or better yet the hills, or better still, straight to the fields and farms, you will be introduced to an entirely new word for bolognese: ragù.

Ragù alla bolognese is the true bolognese recipe. It is a slowly-simmered meat sauce and it is enjoyed all across the country. Unlike a bolognese recipe, there is not just one way of preparing it either. Every city has a different recipe with different tricks and different ingredients. In fact even every family will have a different recipe from another, and if you ask any Italian where to find the best ragu in Italy, their answer will always be the same; grandma’s house.

Bologna: the true home of the Bolognese recipe

The ragù most similar to the sauce you see typically in a bolognese recipe is known in Italy as ragù alla bolognese. This is a ragù that comes from the city of Bologna and differs from its southern counterparts in a few ways.

This may be surprising, but a true ragù alla bolognese recipe does not use tinned tomatoes. The point of the ragù is that it is a meat stew, and it is hence the meat’s flavour that calls out most to be heard. Ragu from the south, on the other hand, are from the land of huge and juicy tomatoes, and so are of course heavier on the tomatoes, and make a much more bright and red sauce.

How a ragù Bolognese recipe is properly prepared

A ragù alla bolognese recipe must be slow cooked if you want it to taste like it does in Bologna. The key is to allow the meat to simmer gently in stock for hours until it is soft, and the stew has developed its flavour properly.

However this is getting ahead of ourselves. Before the meat even enters the pan, you must buy the freshest celery, carrot and onion that you can get your hands on. This forms the basis of any true ragù alla bolognese recipe: the soffritto, where you chop these ingredients finely and fry them on low heat perhaps with a little garlic and a bay leaf. The soffritto must be cooked properly and until golden, if not your ragù alla bolognese recipe will have a shallow flavour to it.

When the vegetables have coloured and beg you to add the meat, do not resist them and add it straight away. Watch the mince dance with the soffritto and brown itself as it releases its rich juices into the pan. Now comes one of the most beautiful parts in the ragù bolognese recipe; adding a good glug of wine and sniffing the aroma that instantly arises as the liquid hits the pan.

Milk in a Bolognese recipe?

But suddenly there comes a surprising addition, typical of the inventive and creative people of Bologna. Just as the wine has evaporated, a little cow’s milk is added to the pan. This addition, though often seeming strange to people not from the city, has the ingenious effect of neutralising the acidity of the wine with its alkalinity. Furthermore it serves to soften the meat, and is a key step if you wish to replicate a ragù alla bolognese recipe that would make people from Bologna proud.

The question of to pomodoro or not to pomodoro then arrives… In Bologna perhaps a dash of tomato concentrate will be added at this point, though if you like the flavour to smack truly of stew, you can just add meat broth without any tomato at all. If you tell people in Bologna you prepare your ragù alla bolognese recipe like this, they will probably welcome you as an honorary citizen!

There are many secrets to mastering your ragù bolognese, but chief among them has to be time. The final taste of a ragù must be deep, warming and constant throughout. The vegetables must have taken on the flavour of the meat, and the meat must have taken on the flavour of vegetables. The flavour must have developed to its full complexity and this can require up to three hours. If a person from Bologna wanted to prepare their family ragù alla bolognese recipe for dinner, but had to eat in only 2 hours time, they would never even dream of trying to make it. The perfect bolognese recipe calls for time on the stove, and anything less is unacceptable!

So now you’ve learnt not to mention simply bolognese, but ragù alla bolognese instead, let us summarise how to make the most delicious and authentic version possible!

Heat a large, 6 to 8-quart, heavy-bottomed saucepan.
In the saucepan, heat the olive oil and butter over medium heat. Add the onions, celery, and garlic and sweat over medium heat until the vegetables are translucent and soft but not browned, about 10 to 15 minutes. Add the veal, pork, and pancetta and stir into the vegetables. Add the meat over high heat, stirring to keep the meat from sticking together until browned. Add the tomato paste, milk, and wine and simmer over medium-low heat for 1 to 1 1/2 hours. Season with salt and pepper, to taste, and remove from the heat.
When ready to use, the cooked pasta should be added to the saucepan with the appropriate amount of this hot ragù alla Bolognese recipe, and tossed so that the pasta is evenly coated by the ragù.

And now young maestro, with this new information go forth and teach your friends. Tell them to no longer order or make spaghetti bolognese recipe, but to make rich ragù alla bolognese recipe, served with fresh tagliatelle. And when you get to Italy to enjoy all the most wonderful dishes and ingredients that world cuisine has to offer, do not stop at the restaurant which serves spaghetti bolognese… no my friend, go straight to the small streets with the oldest trattoria you can find, order their ragù of the day, and prepare to be blown away by the results!