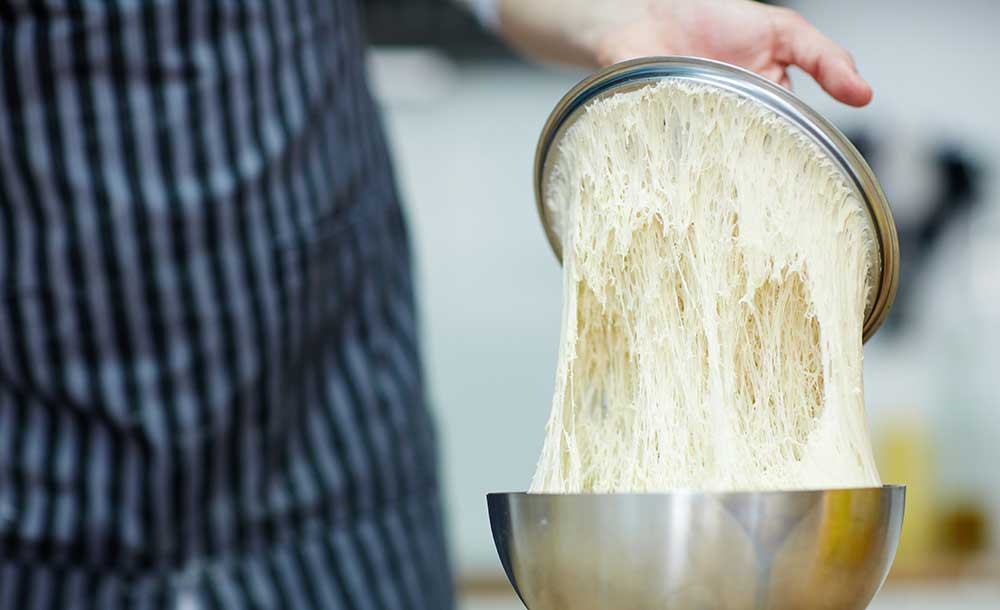 Let's learn how to make sourdough starter: here are the origins and the main characteristics

Bread-making has very ancient origins and it appears that the first experiments of natural leavening to make bread date back to 3.700 B.C. in Europe: according to the Encyclopedia of Food Microbiology, natural yeast was born in Switzerland. When we talk about “sourdough starter" we refer to a natural acidic dough made from flour and water which is deliberately contaminated with micro-organisms found in the ingredients and in the air and which develop a wild local microflora in the mass in which the lactic bacteria culture prevails. So, sourdough starter not only contains yeasts, but also various lactic bacteria of the Lactobacillus family. Rather than with spontaneous leavening, the acidic dough can be prepared by using starter cultures, i.e. elected microorganisms from laboratories or obtained from stable acidic doughs.

Compared with beer yeast – Saccharomyces cerevisiae, where ‘Saccharomyces’ is composed of the Latin saccharin, ‘sugar, with the Greek mikes -ethos ‘fungus’, and ‘cerevisiae’, is a Latin word which means “of beer" – thus called because once it was obtained from deposits formed during the fermentation of beer wort, sourdough starter has a greater variety of active micro-organisms – which also include Saccharomyces cerevisiae -. Acid fermentation is much slower than that obtained with beer yeast; however, the dough made using sourdough starter has many interesting properties:

How to make sourdough starter at home

Sourdough starter can be made just from flour and water, even if many people suggest adding an apple, or malt, honey or sugar, first of all we need durum wheat type 0 flour or spelt flour (200 gr) which must be combined with 100 ml of water. Now let’s see what we must do next to make the sourdough starter. Pour the flour into a container – better if it is transparent, so that we can check how the dough is changing – and add the water a little at a time, mixing with a spoon; then knead with the hands until you get a ball soft enough to leave in the bowl, cover with a slightly damp cloth and keep at room temperature until the following day.

We add another 100 gr of flour and 50 ml of water and knead again, leaving it to rest for a further 24 hours, when we repeat the operation with 50 gr of flour and a little water: This is the same procedure as the one we will use later to feed the dough on alternate days. For preparing baked products which do not need to rise, the sourdough starter will be ready after about 15 days from mixing the first dough, otherwise after a month, when the typical bubbles form and natural leavening takes place. The dough can be kept for a week in the fridge, in a sealed glass jar; every seven days it will need to be fed again; this must be done one hour after the jar has been removed from the fridge. Then the sourdough starter must be left at room temperature for an hour and kept again in the fridge. The micro-organisms that compose the sourdough starter must be fed periodically for their specific metabolism to work; this is why, once the dough has been obtained, it must be kept alive by frequent feeds and the microbiological, organoleptic and rheological characteristics will change at each feed.

How to make sourdough starter with a starter

If you are interested in understanding how to make a sourdough starter at home but want to speed up preparation times, you can start the leavening process by using a starter, i.e. by adding another ingredient such as a ripe fruit, yogurt, honey or some raisins. The additional ingredient, for example, raisins, must be washed in warm water to remove any dust, then blended and used right from the first mixture. The yeast must be rested in a container 5-6 times bigger than that of the dough and left at room temperature for 48 hours before starting the various feeds which, thanks to the addition of water, will feed off the complex sugars (starches) changing into ethylic alcohol and carbon dioxide and increasing the volume of the dough. After 48 hours, you go on by kneading only a part of the dough (150 gr) and throwing the rest away. During the manual kneading phases, the dough must be kneaded energetically on the work surface, bringing the outer edges of the dough towards the centre, until you get a smooth, soft and not sticky ball. During preparation, problems may arise: if, for example black spots appear in the sourdough starter, this could be mould and you will have to start again from scratch.