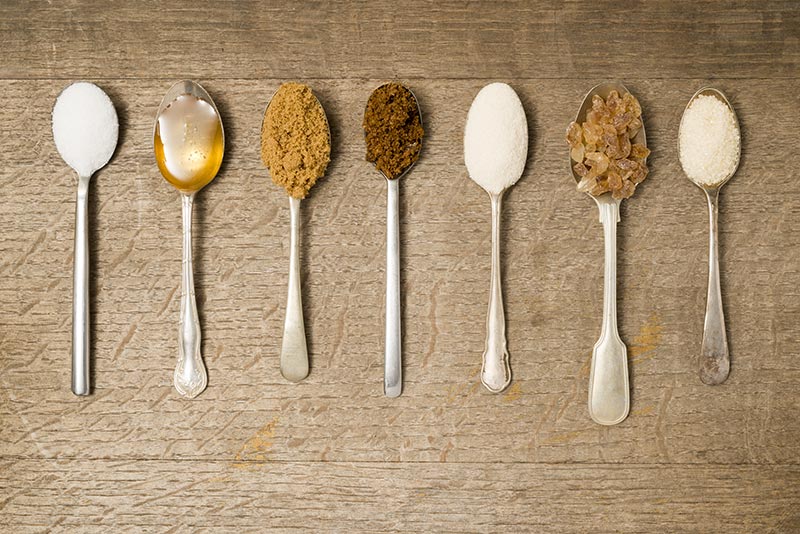 The origins of sugar (glucose + fructose)

When we say “sugar” we are usually referring to sucrose, an organic compound of the glucose disaccharides family, characterised by a molecule composed of two monosaccharides, i.e. glucose and fructose. Sucrose is extracted from many products found in nature – it is an energy reserve for plants – such as sugar beet and sugar cane, honey, fruit, maple and coconut palm and is then found on sale in the “refined” white form or the “brownish” raw form. First evidence of the development of extraction processes and the use of sugar in cooking dates back as far as 5000 B.C. and since then increasingly refined extraction techniques have been developed varying according to the different parts of the world, from Polynesia to China, India, Australia, Latin America, reaching Europe around 500 B.C. It seems that sugar was used by the Arabs as early as the VI century A.D. and it was they who expanded the growing of sugar cane. This cooking element was considered precious and was very expensive for a long time so that only well-off families could afford to use it as a sweetener. Currently various types of sugar are available on the market:

fructose: one of the alternatives to “sugar”

Ignoring synthetic sweeteners such as aspartame, xylitol, sorbitol, sucralose and acesulpham, alternatives to cooking sugar can be found for sale and one of these is fructose. In terms of chemical structure, unlike sucrose, fructose is a monosaccharide and can be found in fruit, honey and vegetables. One of its characteristics is that it tends to absorb water from the external environment, the reason why it is used as a preservative to prevent many products from drying. At ambient temperature, fructose is found in liquid form, but through the refining process white crystals are obtained from it which make it look like sucrose, making it easier to sell. If eaten on its own, fructose has the property of reaching the small intestine unchanged, from where it is absorbed and carried to the liver. Compared with sucrose it has a slower absorption speed and if eaten in excessive quantities can experience rapid fermentation. Also, if an excessive amount of it is found in the body, fructose is converted into lactic acid or into triglycerides which will then enter the blood or be deposited in the liver: these last two aspects are clearly two “disadvantages” of fructose compared with sucrose. A point in favour of fructose is that it has a higher sweetening power so therefore less of it can be used. Often, we wrongly associate the idea of fructose with that of a “natural” healthier alternative to sucrose which is, on the other hand, considered to be an “industrial product”. The truth is that, all things considered, they have similar properties (they are simple carbohydrates and not complex ones like starches), both have advantages and disadvantages and the “bad news” is that both should be assumed with moderation.

But, which is better, sugar or fructose?

Aware of these simple, fundamental differences between what we commonly call sugar and fructose, we can also choose, according to the particular recommendations of our doctor. When we shop, we must, without a doubt, always carefully consider the misleading slogans which companies sometimes use to sell sugars or products containing sugars such as fructose which are presented as “natural” without giving any explanations to consumers and appealing to their emotions rather than explicitly indicating nutritional values. Even with the simple words “without added sugars”, for example, a rather vague concept is expressed and often the manufacturer wants to give the impression that this food is “dietetic” or “healthier”. Our first suggestion, therefore, is to look out for the label which describes the nutritional values.