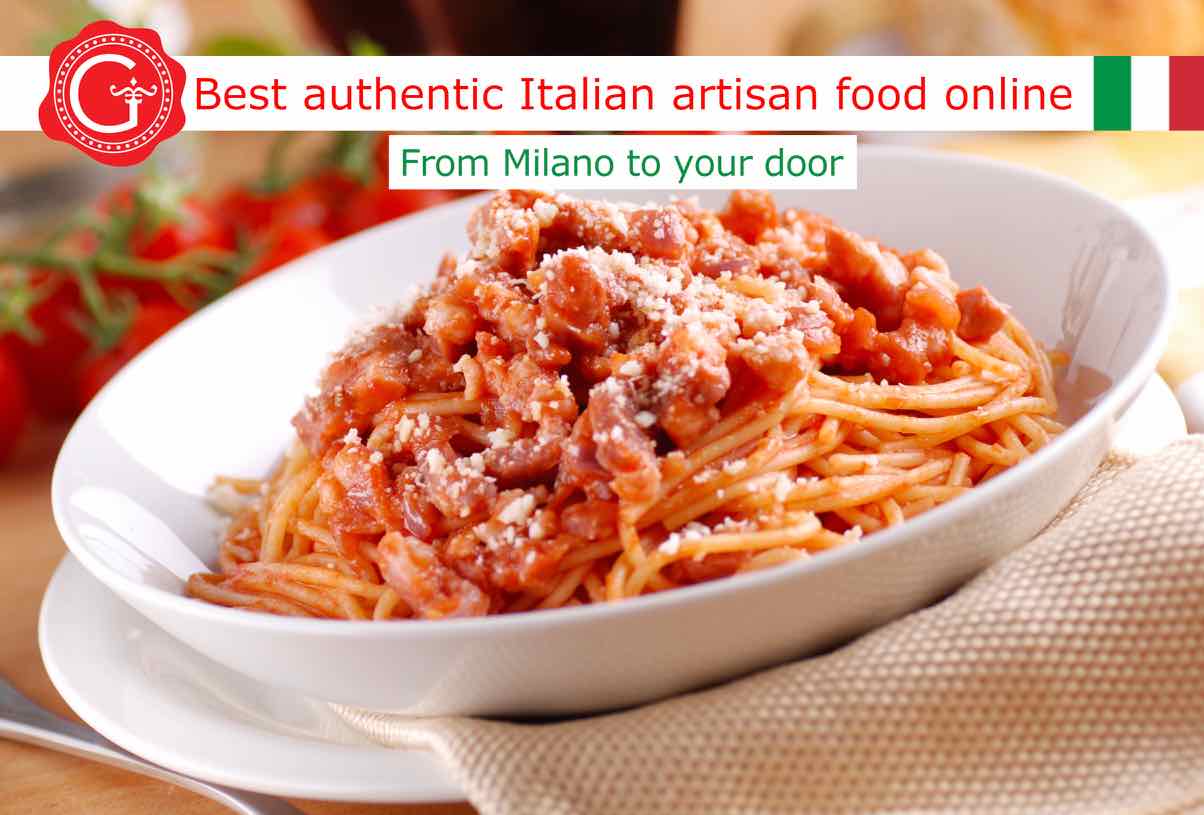 Amatriciana sauce is a well-known Italian recipe. It is easy to find in restaurants spaghetti amatriciana, bucatini amatriciana or other pasta shapes seasoned with this sauce. And at home, with friends, pasta amatriciana is an exceptional dish.
In Italy we say salsa all’amatriciana, which translates to sauce in the manner of Amatrice or sauce in the manner it is cooked in the Amatrice area.
Over the years the recipe has partly changed: the recipe proposed by Ada Boni in her Il talismano della felicità (The Talisman of Happiness), for example, is different from the recipe given in the 2015 Amatriciana sauce production disciplinary.
Let’s see a version of the recipe that we believe is very tasty, hypotheses about the origin of the recipe and some changes of this tasty sauce over the years. Preparation time for pasta all’amatriciana is about 15 minutes; cooking time is about 20 minutes.

Here are the ingredients of Gustorotondo for an amatriciana sauce to season 320 grams of pasta:

PREPARATION OF PASTA WITH AMATRICIANA SAUCE 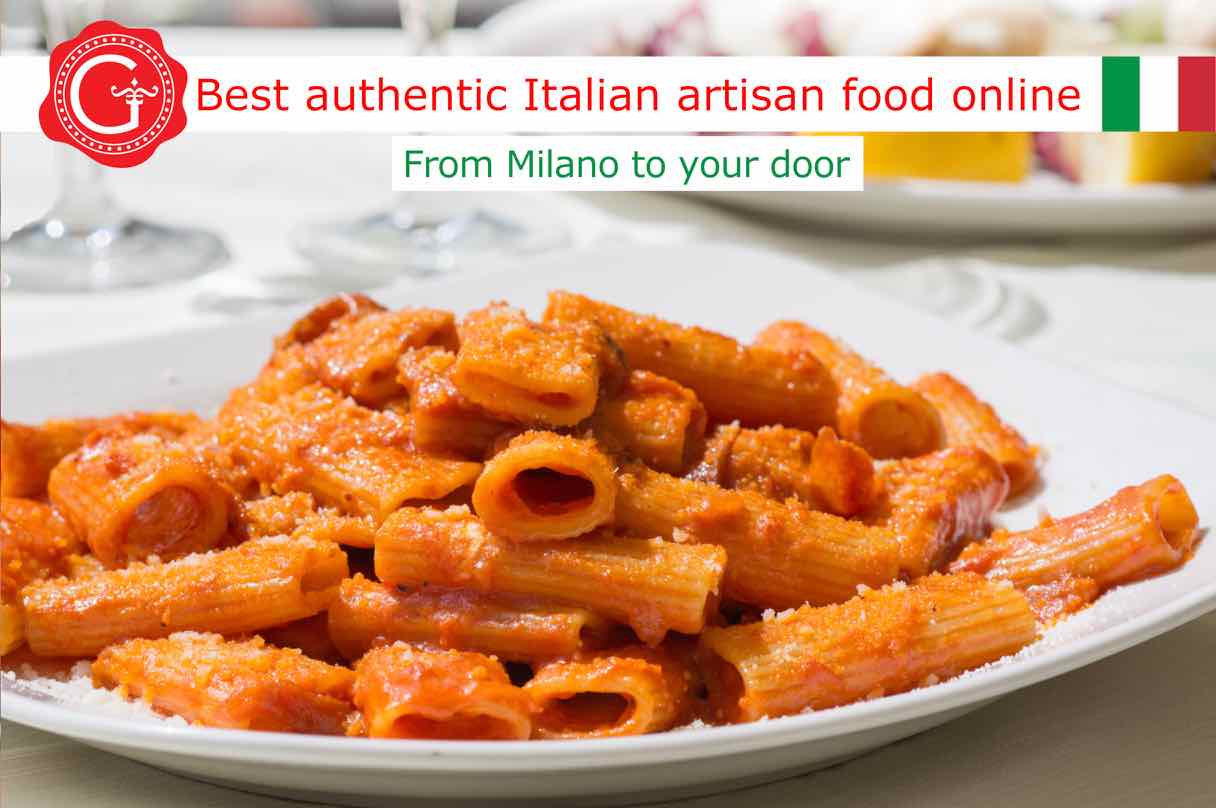 SOME TIPS OR FURTHER INFORMATIONS

SHOP ONLINE THE BEST ARTISAN ITALIAN PASTA FOR YOUR AMATRICIANA

SHOP ONLINE OUR SELECTION OF THE BEST ARTISAN ITALIAN PASTA

According to the Production disciplinary for the Amatriciana sauce, the recipe originates on the Amatrician side of the Monti della Laga. According to the explanation, the local shepherds, during the transhumance period, which kept them away from home for 4 or 5 months, brought with them some products that could be stored for a long time, such as guanciale, pecorino and flour.
The disciplinary distinguishes between white amatriciana sauce, also known as Gricia, and red amatriciana sauce. Continuing, it indicates that the history of Amatriciana sauce is from Abruzzo until 1927, the year in which the boundaries between Lazio and Abruzzo changed. It also states that the introduction of the tomato in the recipe took place at the end of the eighteenth century, a period in which Amatrice was part of the Kingdom of Naples.

The recipe from Il Talismano della felicità by Ada Boni

The first Amatriciana recipe that has been published is perhaps that of Il talismano della felicità (The talisman of happiness) by Ada Boni. Here, amatriciana spaghetti are considered a typical dish of Roman cuisine despite their name. Tomatoes are peeled and cut into pieces, and the seeds are removed. The guanciale is chopped and sautéed with lard and onion. When the guanciale and onion are browned but not too much, the tomatoes are added. Tomatoes are cooked but not overdone. Ada Boni states that the traditional recipe requires pecorino and that, however, if a person does not like the spicy flavor of pecorino, he can use half pecorino and half Parmigiano, or just Parmigiano. The pepper, concludes the Boni, must dominate in this spaghetti.

Amatriciana sauce with pancetta and other variations

Some later recipes replaced the guanciale with pancetta, perhaps because the latter was more readily available. In L’art culinaire moderne by Henri-Paul Pellaprat, the chef who founded the Cordon Bleu school in 1895, the ingredients of the recipe for spaghetti with amatriciana for 6 people are: 500 g of spaghetti, 150 g of pancetta, 2 tablespoons of olive oil, 20 g of onion, 250 g of peeled tomatoes, pepper and salt to taste, 100 g of pecorino cheese (or Parmigiano mixed with pecorino cheese), 30-40 g of butter.
Since the early 1960s, however, pancetta is rarely considered an ingredient of amatriciana. According to some, pancetta gives the sauce an excessive flavor.
Furthermore, already in the 1930s someone had introduced the chili pepper instead of pepper.

Subsequent changes in the amatriciana sauce

During the period of the Italian economic boom, the ingredients of the amatriciana recipe tend to strongly stabilize on the following: guanciale from Amatrice, tomato, Pecorino Romano and chili pepper. Today in the recipe the onion tends not to be used.
In the Production disciplinary for the Amatriciana sauce, approved in 2015 and partially modified in 2016 from the Municipality of Amatrice, among the ingredients of the amatriciana sauce we find white wine, used to blend the guanciale. Furthermore, there is the possibility of using preserved peeled tomatoes instead of fresh tomatoes. Chili is considered optional, while pecorino, normally considered essential for the recipe, is indicated as a recommended pairing (the Disciplinary recommends adding plenty of Pecorino di Amatrice De.Co.).

The authentic amatriciana recipe, then?

According to some, Amatriciana and Matriciana are different recipes. The first would be typical of Amatrice, while the second would be a typical Roman recipe. This distinction raises some doubts considering that, in a booklet of La Cucina Italiana of April 1937, an article entitled Amatrice, la terra dei cuochi (Amatrice, the land of cooks) tells of Nicandro, owner of a trattoria, of the fact that he ordered spaghetti matriciana and of the fact that he distinguished two types of spaghetti alla matriciana, one with tomato and one without.
A few years earlier, on 1 April 1917, we find the name matriciana mentioned together with the caloric intake for a portion (837 kcal).
An hypothesis is that the name matriciana is the result of an apheresis: the name of the recipe, which is correctly written Amatriciana, is pronounced as if the first ‘a’ of Amatriciana were part of the article: here we have the matriciana. 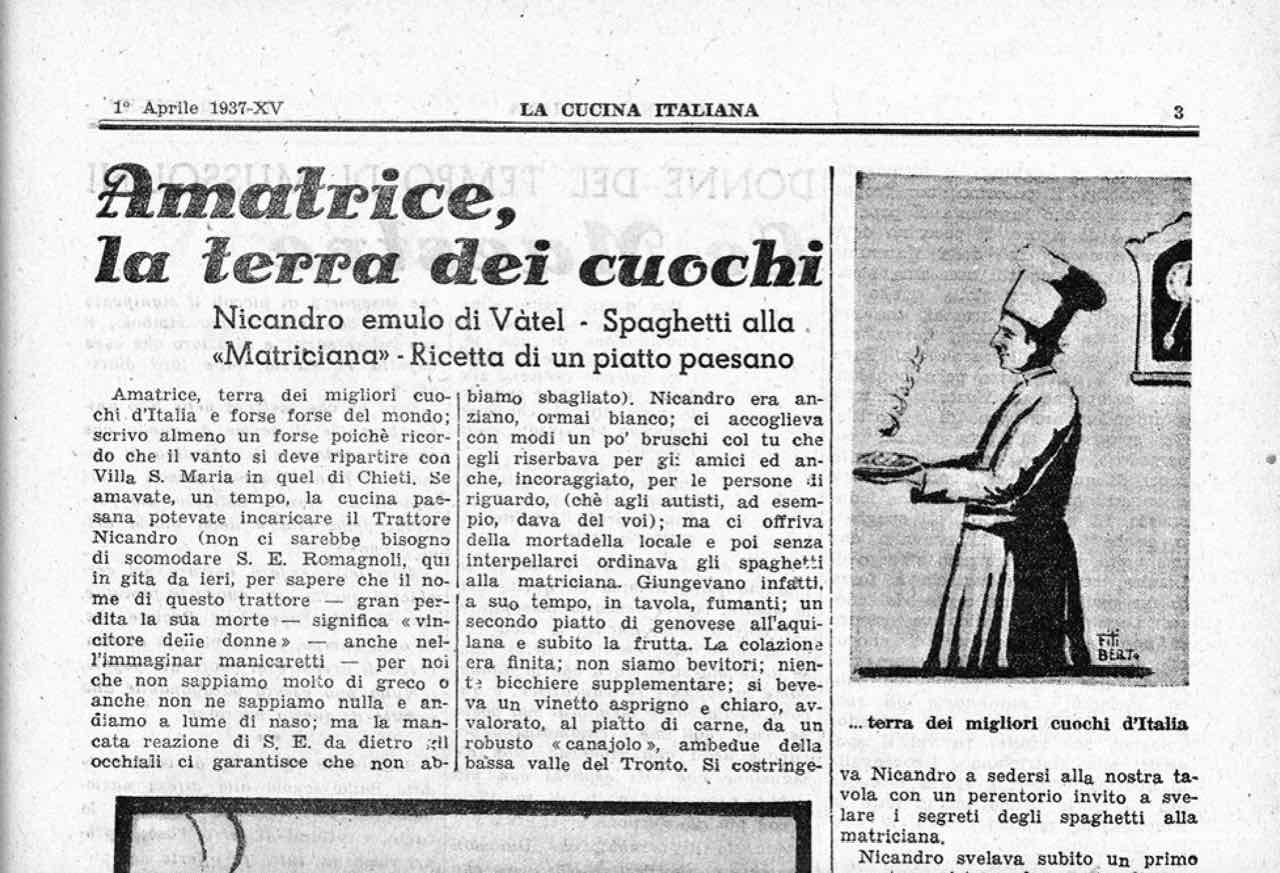 IF YOU ENJOYED THE ARTICLE ABOUT AMATRICIANA SAUCE, PLEASE SHARE IT AND SIGN UP TO THE GUSTOROTONDO NEWSLETTER!