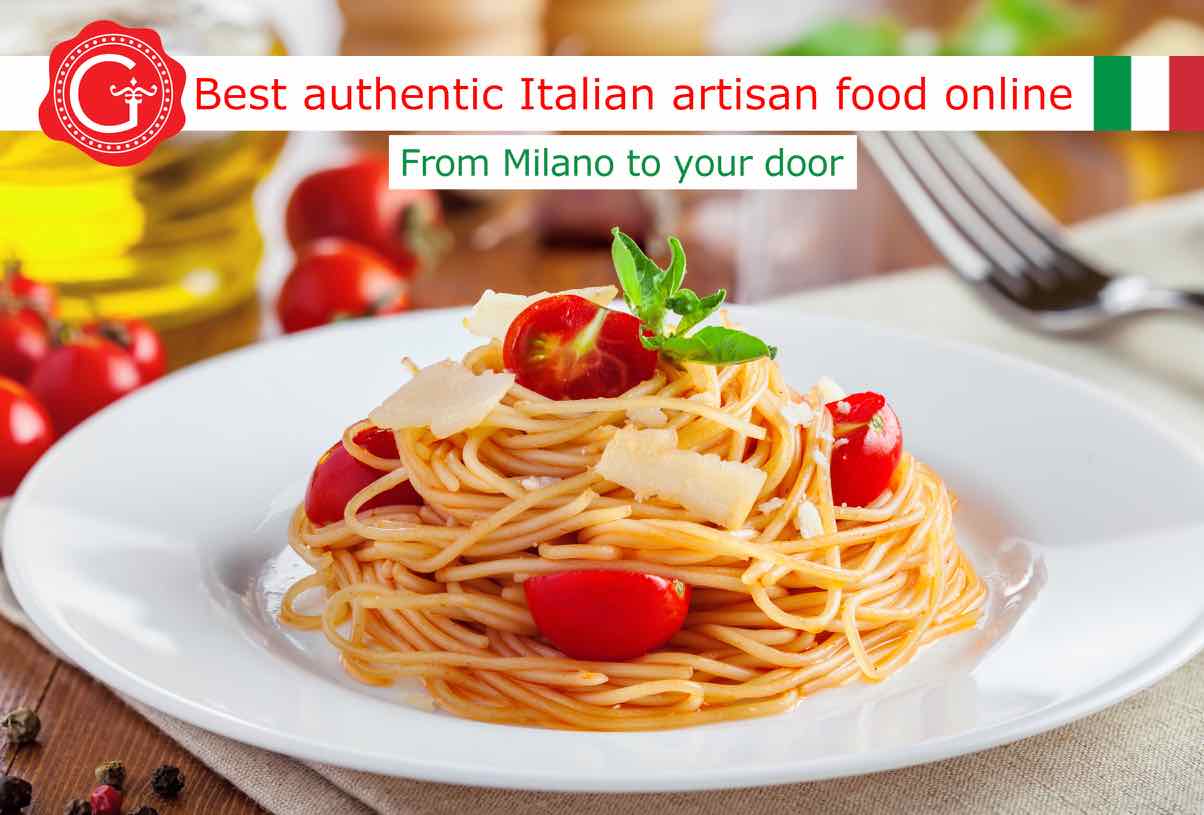 Pasta in Italy is widespread in every region, and there are many pasta shapes, names and recipes.
Italy is the only European country to have developed pasta dishes since the Middle Ages, instead of using it only as an ingredient for broth or as accompaniment ingredient (such as happens with bread). Even today pasta dishes are ‘first courses’, and not a simple side dish.
Italy has developed above all the culture of what we now call pastasciutta, that translates dry pasta, while pasta for broth, that we also call pastina (which translates small pasta) are less widespread.
Some types of pasta are found almost exclusively in a certain area of ​​Italy, while others are widespread throughout the national territory.
In this article we will see something more about pasta in Italy: the most common types of pasta in Italy, how dry pasta is produced, particularly well-known pasta recipes, artisan pasta.

TYPES OF PASTA IN ITALY

The types of pasta in Italy can be classified in different ways.
We can consider the ingredients and the production method, and we will have for example dried pasta and fresh pasta, soft wheat flour pasta and durum wheat semolina pasta, egg pasta or egg-free pasta, filled pasta and non-filled pasta.
Or we can consider the different pasta shapes in Italy. Currently in Italy about 200 pasta shapes are on the market. Some formats are produced in large volumes for different markets, while others are typical of a certain Italian area and are not easily found outside of it.
Although pasta in Italy is declined according to different types, shapes and names, it is the culture of dry pastathat we have developed most over the centuries.
Let’s look at some of the most common shapes of pasta in Italy and answer a question: what is the most popular pasta in Italy?

What is the most popular pasta in Italy?

Is there a shape of pasta in Italy that is more common on the tables? Yes, spaghetti is the most popular pasta in Italy, the most consumed pasta.
Spaghetti, in addition to being present in the culinary traditions of northern, central and southern Italy, are also the format that best represents the Italian food culture in the world.
Spaghetti are part of the Vermicelli family, and the name means small strings.
One of the classic recipes made with spaghetti is Spaghetti alla Carbonara. 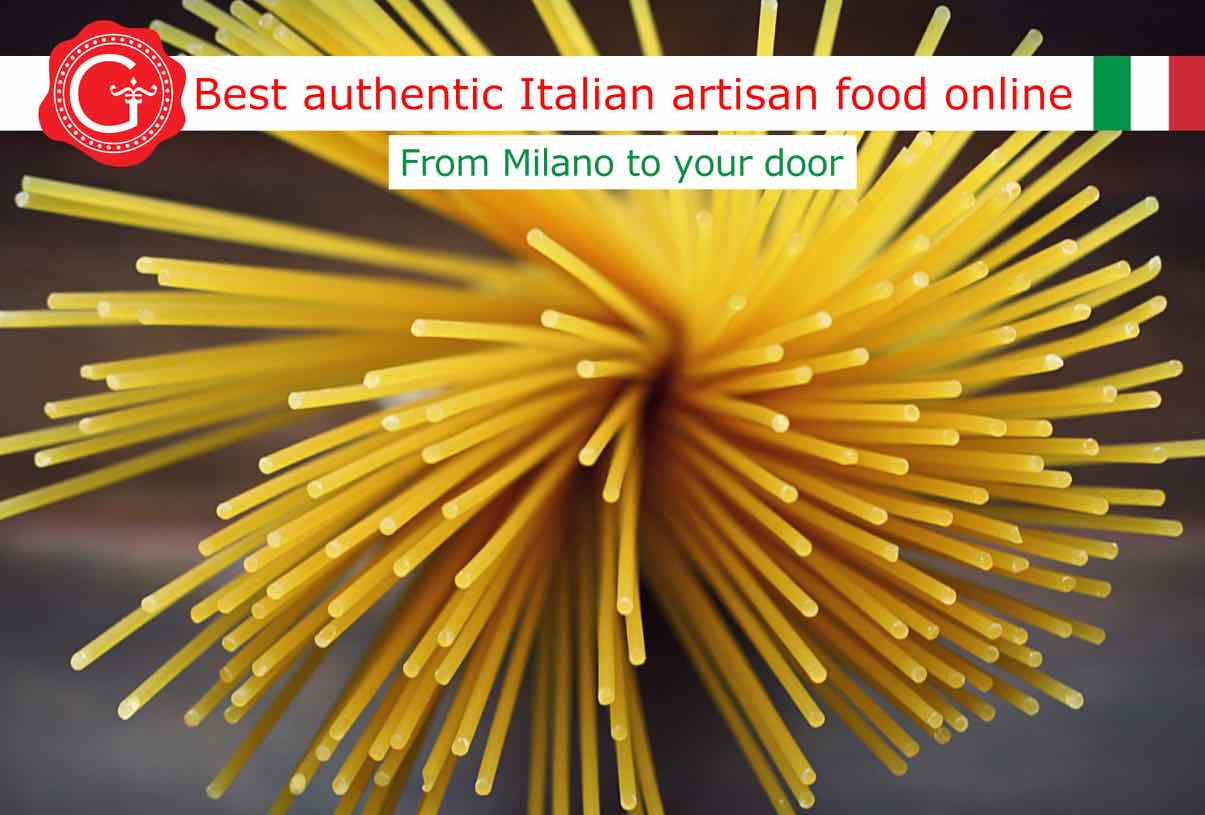 Penne are a format of Italian pasta whose invention is attributed to Giovanni Battista Capurro, pasta maker of San Martino d ‘Albano, near Genoa. He patented, in 1865, a machine capable of diagonally cutting the dough without crushing it (you can find here the indication of the release of an exclusive design certificate issued in the second half of 1865 relating to Machines for cutting pastries prepared from vermicellaio). Until then, the operation was carried out by hand with scissors.
A very well-known dish is that of Penne all’arrabbiata.
The penne with ridges, i.e. the Penne rigate, are the second most sold shape of pasta in Italy. Thanks to the ridges, the Penne rigateretain the full-bodied sauces, and go well with meat and vegetable ragù.

Another pasta shape that Italians love much is fusilli.
The name fusilliderives from the Italian voice fuso, a wooden instrument used for hand spinning and which envisages, as for fusilli, a rolling action.
In 1924 Guido and Aurelio Tanzi, two Italian brothers who emigrated to New York, invented the machine called Fusilla, which allowed a perfectly ‘centered’ production.

The fusilli are of Arabic derivation: in Sicily the shape of fusilli made rolling up pasta by hand is called busiata, and in Sardinia busa. In Arabic, the word busindicates the thin reed (of the plant called by some Arundo aegyptiaca) around which the dough was rolled.
Until 1924, fusilli were hand-made by wrapping pasta around an iron. In Puglia they were also referred to as macaroni a ferrittus; in Basilicata also as maccheroni chi fir, and in Sardinia as maccarones a ferrittus. In Abruzzo, Molise and Lazio they were also referred to as ciufolitti, sfusellati, zufolettiand gnocchi col ferro. Ferrotranslates iron, and it refers to the iron stick around which the dough was rolled). In many regions they were known as strangolapreti, and in Veneto and Friuli as subioti.

Another popular shape of pasta in Italy is Farfalle.

Farfalle translates butterflies: the name of the shape derives from its resemblance to the wings of the butterfly. This pasta shape is also indicated by the term stricchetti, from the verb to tighten (in Italian: stringere) with reference to the fact that the dough is tightened in the middle. In Bologna the stricchettiwere prepared to use the fresh pasta scraps that advanced from the preparation of tortellini and tortelloni.
The Farfalle combine well with both robust winter dressings and light summer recipes such as pasta with tuna, cherry tomatoes and olives. 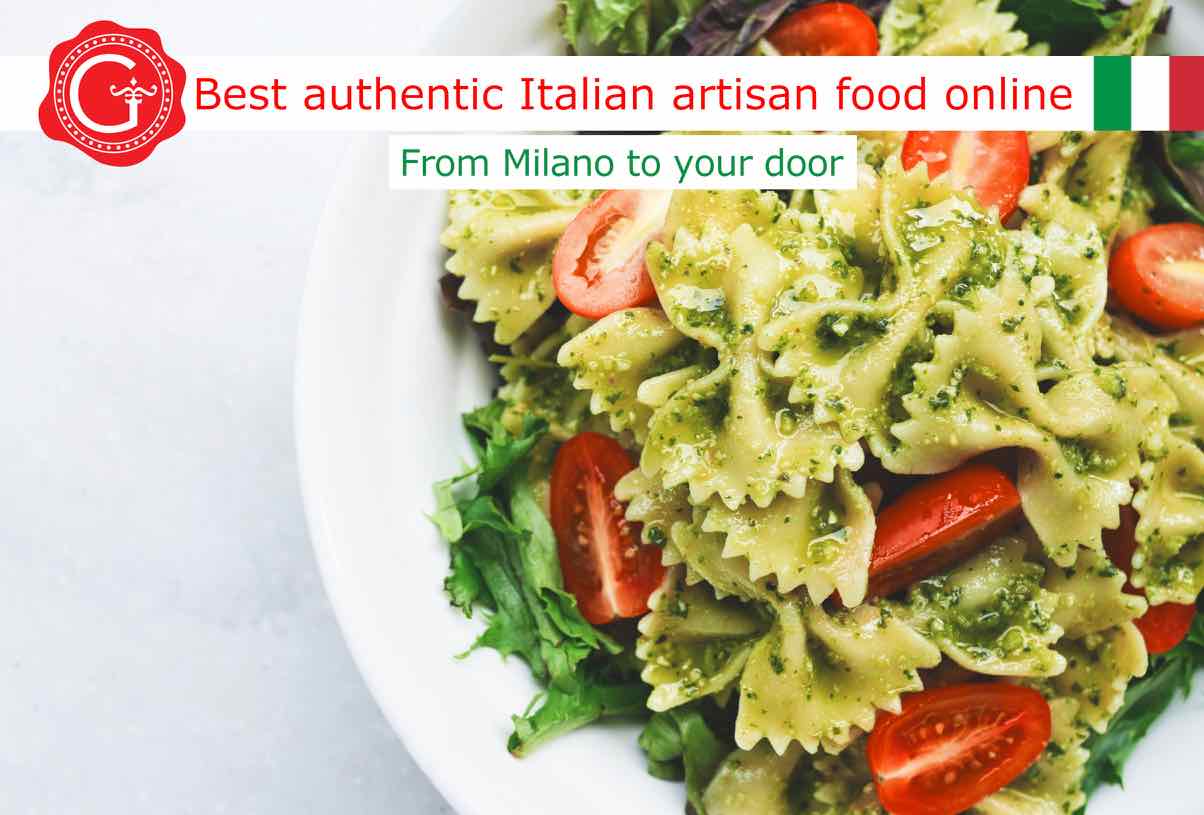 Some other pasta shapes in Italy

In Italy there are many other pasta shapes. Here we will limit ourselves to indicating a few. Among the most widespread, in addition to those seen above, we find:

There are many other pasta shapes. Some are very versatile, others are much more suitable for specific dishes as baked pasta or soups.
Find out more about the types of pasta in Italy

If there are many types of pasta in Italy, even more are the names by which they are called.
Franco Mosino (Reggio Calabria 1932-2015), distinguished linguist and Greek scholar, careful scholar of regional history and Nobel candidate for literature in 2013, in his etymological Vocabulary of Italian pasta (LINK) has surveyed and registered 1238 names of pasta.
Some of the pasta names refer to the shape of pasta, as for example in the case of Tagliatelle, Tagliolini, Maltagliati, Bucatini or Tortiglioni (tagliare translates to cut). Other pasta names are from a similarity with another thing, as in the case of Orecchiette (small ears), Linguine (small tongues), Farfalle (butterflies), Stelline (little stars), Nidi (nests). Some names are taken from the religious sphere, such as the Paternoster and the Avemarie, which refer respectively to larger and smaller beads of the Rosary. Then there are names that refer to the instrument with which pasta is produced, as in the case of Pasta alla Chitarra (Chitarra translates Guitar, referring to a special instrument, similar to a Guitar, that is used to prepare this kind of pasta). 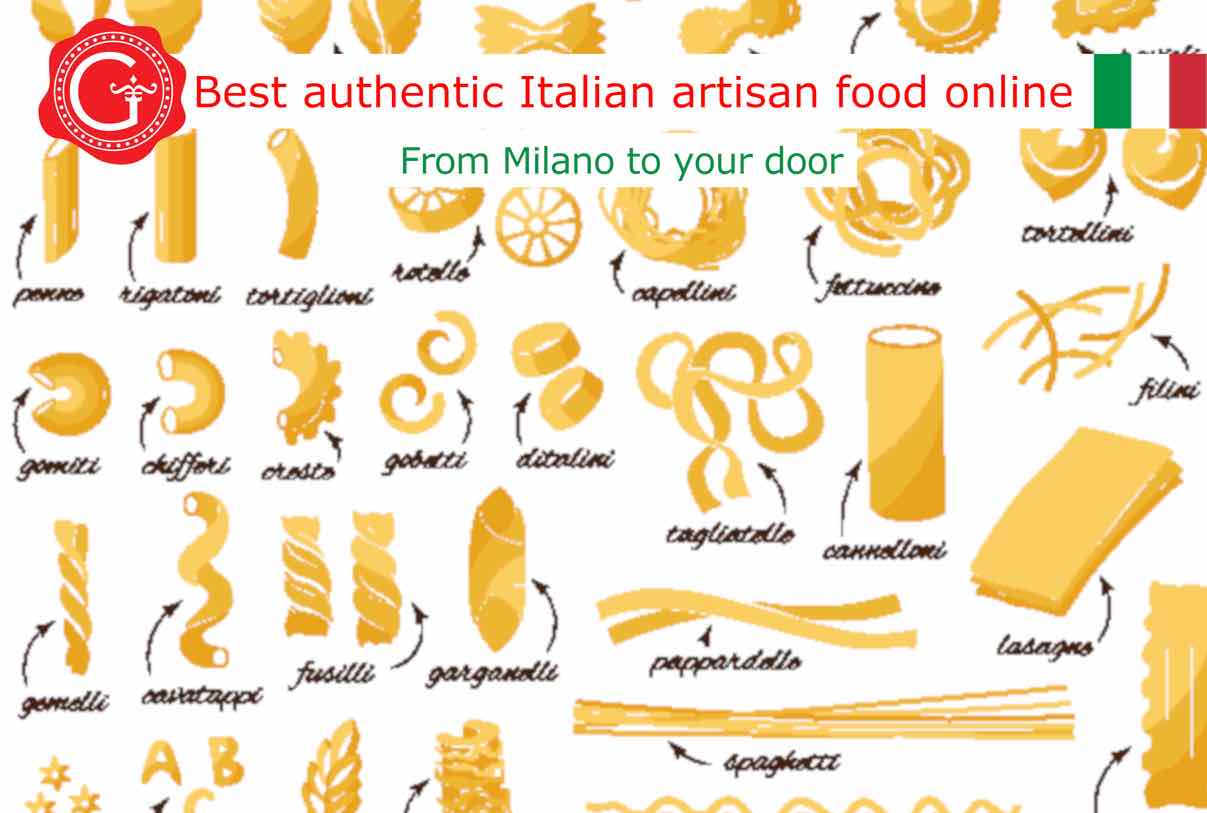 There are many classic recipes prepared with pasta in Italy, some of which are particularly well known. Among the most famous Italian pasta dishes we find:

Carbonara
Pasta alla Carbonaranormally involves the use of spaghetti, but it also works well with rigatoni.
If you want to prepare it, read the recipe for spaghetti Carbonara

Arrabbiata
The Arrabiata recipe is typically Roman, and it is normally prepared with Penne.
According to some, the name ‘arrabbiata’, that translates ‘angry’, derives from the fact that the spicy taste makes those who eat it blush, as if they were angry.

Aglio, olio e peproncino
Garlic, oil and chilli is another classic pasta recipe.
It was born in southern Italy, where its ingredients were widespread much more than in the northern cuisine. It is usually prepared with spaghetti, but also with linguine.

Pasta alla Norma
Pasta alla Norma is a recipe typical of Sicily. According to some, the name derives from an expression by Nino Martoglio, a Sicilian playwright, writer and poet. He was so impressed by the goodness of the dish, that he compared it to the Norma, the famous work of the composer Vincenzo Bellini from Catania. 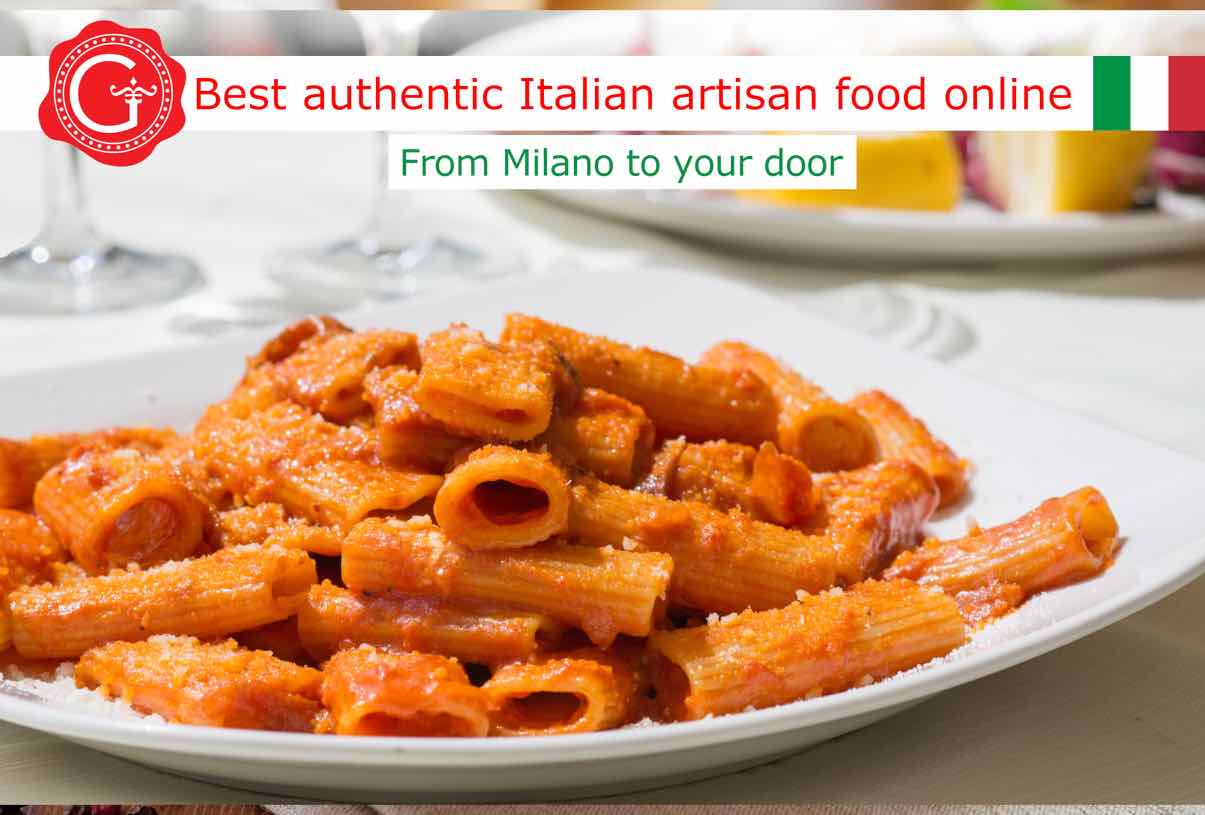 HOW IS PASTA MADE?

In the dry pasta production, we can identify different phases:

Gluten is formed during the mixing and kneading phase. How is it formed?
Gliadins (proteins present in durum wheat) join forming fibrils; glutenins (other proteins) combine to form fibers. Glutenins and gliadins form a three-dimensional grid, and starch granules and air bubbles remain trapped in the grid. The fibrils formed by the gliadins confer extensibility to gluten. The fibers produced by glutenins instead give resistance to extension (stability, toughness).

Pasta in Italy is produced by over 100 companies. Some smaller companies, indicated sometimes improperly as artisan pasta producers, produce particularly high-quality pasta.
One of the important elements in pasta production is the drying stage. Some producers use high temperature drying methods (70 – 80 °C, 158 – 176 °F), which allow a very short drying time (a few hours).
The artisan pasta factories and some large pasta factories instead use drying systems that provide lower temperatures (for example temperatures below 54 °C, 129,2 °F). The drying process requires, in this case, much longer times (for example 30 hours). According to some, however, low temperatures make it possible to better maintain the organoleptic and nutritional characteristics of the raw material (durum wheat).

WHY IS PASTA POPULAR IN ITALY?

Pasta has a long tradition in Italy. Even though pasta in the Middle Ages probably did not constitute a defined culinary category, and there was no general term such as the current ‘pasta’, it already occupied an important place on the tables. Doctors were probably the first to consider pasta as a food category.
In the Libro de arte coquinaria (The art of cooking), probably written in Rome in 1464/65, Maestro Martino, at the end of a paragraph dedicated to vermicelli, somehow groups together different types of pasta by writing: «Et tutte queste vivande di pasta deveno essere gialle di zafrano, excepto quando se coceno in lacte», which transalates: «And all these pasta dishes must be yellow of saffron, except when they cook in milk».
Sicily was probably the cradle of intensive artisanal production of dry Italian pasta, and Sardinia was its competitor. Inventions like the extrusion press helped develop pasta making, and then the industrial era came, with steam machines and then electricity.
In the twentieth century, dried pasta, produced by companies, spread considerably and partially replaced fresh pasta.

Pasta in Italy and in other countries

The current spread of pasta cooked in the Italian way is largely due to persons who have emigrated from Italy to other Countries. These people have brought with them the tradition of pasta cooked in the manner of Italians (al dente!), and in some cases they have created places where pasta is consumed or have helped create networks of relationships for importation.

HOW MUCH PASTA DOES AN ITALIAN CONSUME A YEAR?

Pasta in Italy has a significant role at the table: in Italy, pasta consumption is about 20 kg per person per year. Italy is the world’s leading producer, and is also the country where more people consume it.
Here is a part of the ranking of Countries for per capita consumption of pasta in 2018:

Some European countries where a large quantity of pasta is consumed are:

Almost 1 pasta dish out of 4 consumed in the world is produced by an Italian pasta factory.

PASTA IN ITALY: SOME REFERENCES AND BIBLIOGRAPHY

IF YOU ENJOYED THE ARTICLE ABOUT PASTA IN ITALY, SHARE IT AND SIGN UP TO THE GUSTOROTONDO NEWSLETTER!