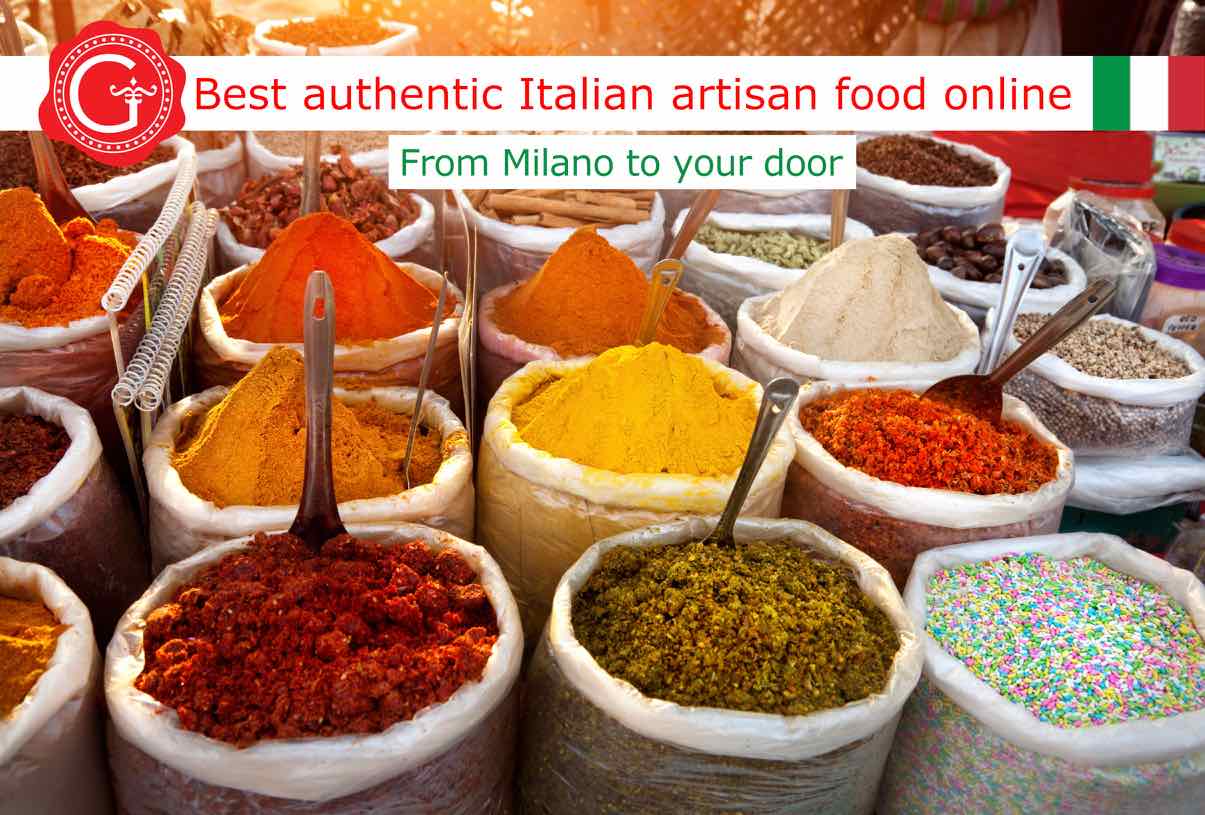 The recipe for curry is often considered to be only one and a classic. When we talk about curry, we normally refer to a ready-made mixture of spices. The word appears to us to be somewhat exotic: it recalls the world of India or other Eastern Countries. We use it in some recipes, especially for preparing curry chicken, perhaps together with basmati rice. Furthermore, the content of turmeric and other spices is sometimes associated with health benefits. But where does the word curry come from? What is the curry recipe? What are the ingredients and its origin? Let's try to see!

Curry is used in different recipes. Here are some: 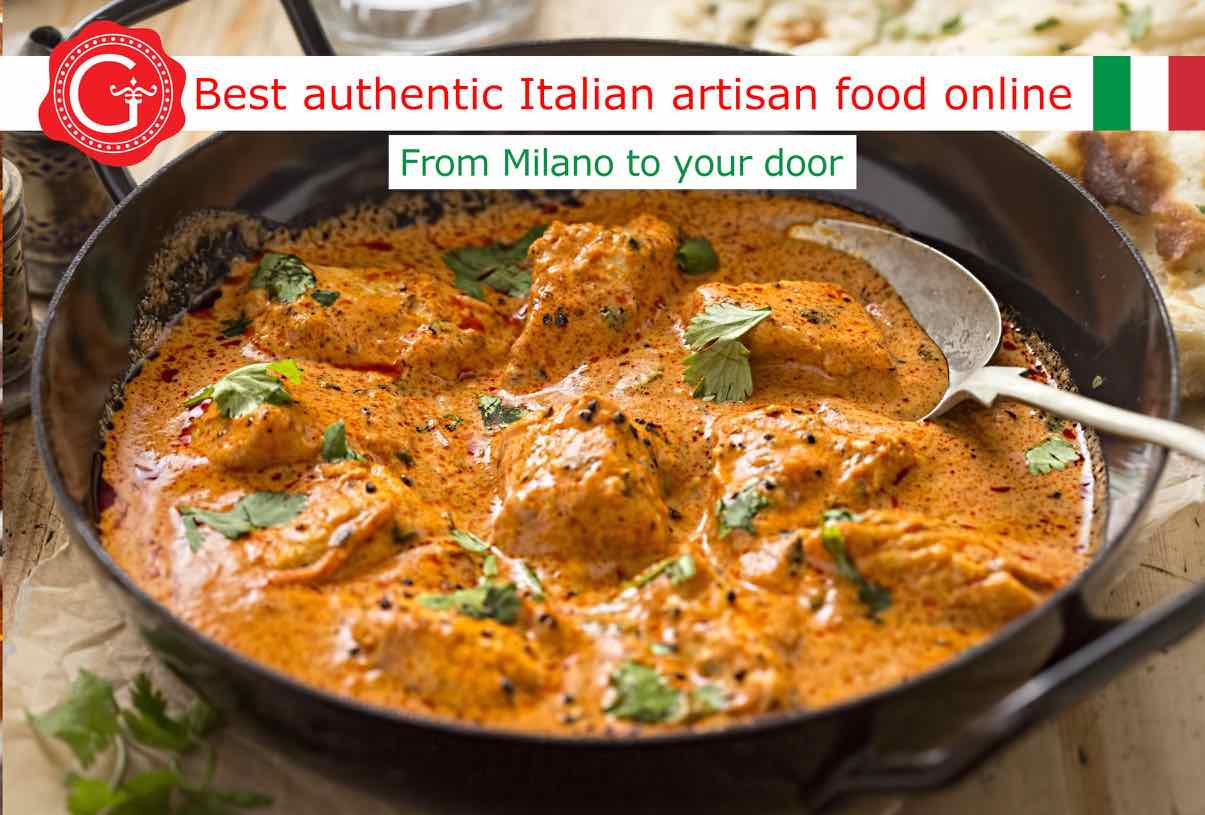 SHOP ONLINE THE BEST ARTISAN ITALIAN INGREDIENTS FOR YOUR DISHES

The recipe for curry, as we’ll see later, has a history in which different culinary traditions are probably intertwined. In India, pre-packaged spices are not used for cooking; instead in India people start from different ingredients to prepare different mixtures. The name curry then, as we shall see, is not an Indian name.
Today there are several curry powders on sale, with different ingredients. Among the ingredients we can find black pepper, cumin, coriander, cinnamon, turmeric, cloves, ginger, fenugreek, nutmeg, chilli, cardamom. Depending on the spices contained and on the proportions between them, it is possible to obtain a mild curry or sweet curry, that is very spicy contrary to what the adjective may suggest.

HOW TO MAKE CURRY

Preparing curry powder starting from the ingredients is simple. Let’s see ingredients and method of a recipe for curry.

Among the ingredients of the recipe for curry, as we have seen, we find turmeric. Turmeric (Curcuma longa L., belonging to the Zingiberaceae family) is a genus of plant which, according to the Plant List Database, in 2019 includes 93 different recognized species. The turmeric powder is made using the orange pulp inside its rhizome.
A study indicates that in northern India curcuma is commonly called haldi, a word derived from the Sanskrit word haridra, and in the south it is called manjal , a word that is often used in ancient Tamil literature. The English name turmeric derives from the Latin word terra merita (meritorious land), and refers to the color of ground turmeric, which resembles a mineral pigment. In Italian turmeric translates to curcuma, a word of Latin origin.

According to some, curry could have beneficial properties for human health. Some of the health benefits of curry would also be caused by turmeric, and perhaps from the curcumin and curcuminoids it contains. Turmeric could help to prevent some forms of cancer (https://www.ncbi.nlm.nih.gov/pubmed/18687351) and the beneficial properties of turmeric perhaps explain the fact that in India the incidence of colorectal and prostate cancers is among the lowest in the world. However, the amount of turmeric in the curry powder is very low.
Other health benefits of curry could come from other spices. An article published in 2010 in the Current Cardiology Reviews claims that spices such as garlic, pepper, coriander, ginger, turmeric and cinnamon commonly used in Indian cuisine and contain a wide range of natural phytochemicals that have complementary and overlapping actions. The article then states that ss several metabolic diseases and age-related degenerative disorders such as cardiovascular disorders are closely associated with oxidative processes in the body, the use of herbs and spices as a source of antioxidants to combat oxidation warrants further attention. At present, say the authors, recommendations are warranrted to support the consumption of foods rich in bioactive components, such as spices. Over time, we can expect to see more scientific evidence supporting the benefits of spices in the overall maintenance of a healthy heart.

The term curry also refers to an aromatic plant used in cooking, the Murraya koenigii, from the Rutaceae family, commonly referred to as curry leaf. The curry leaves contain essential oils. Leaves, fruits and roots and bark are used in Indian Ayurvedic medicine, and the curry leaf is the subject of studies (LINK: https://www.ncbi.nlm.nih.gov/pubmed/21849142) aimed at verifying its therapeutic potential.

ORIGINS OF THE RECIPE FOR CURRY

What is the origin of the recipe for curry?
Let's start by saying that, in Indian cuisine, any mixture of spices used as an ingredient in the dish being cooked is indicated by the term masala. The term masala perhaps derives from the Persian masâlih, which also means materials and spices, in turn derived from the Arabic ṣalaḥa.
And the term curry? According to a study, the Tamil word kaRi is used with different meanings in different social contexts.
The Chennai Univercity Tamil Lexicon Dictionary indicates that kari means:

Some people believe that the word kari indicates a way of cooking, on the grill; others think that it refers to the way of cooking ‘stew’. Kari also indicates blackness, darkness: could it refer to the color of what is toasted?
Someone notes that Tamil has two distinct ‘r’ sounds, and that kari has different meanings depending on the pronounced ‘r’. One means to blacken or season; the other derives from the verb to biteand can be used as a noun for meat or vegetables.

Some Englishmen, during the colonial period, may have thought that the word used to indicate the way of cooking referred to the sauce used as an ingredient. When soldiers and officials on leave returned to England from India, they bought and brought with them premixed spice powders, which they called curry.

In an etymological dictionary of Tamil loanwords in English and other languages, we find that the words curry and curree derive from Latin, Portuguese, Dutch and Tamil.

Also the wiktionary reports a composite etymology: 1747 (as currey, first recipe published for the dish in English), from Tamil கறி(kaṟi), influenced by the existing Middle English cury (“cooking"), from Middle French cuyre (“to cook") (from which also cuisine), from vulgar Latin cocere, from Latin coquere, present active infinitive of coquō. Earlier cury found in 1390 cookbook  Forme of Cury (Forms of Cooking) by court chefs of Richard II of England.

According to the Hobson – Jobson – The Definitive Glossary of British India, it is possible that the kind of curry used by Europeans and Mohammedans is not of purely Indian origin, but has come down from the spiced cookery of medieval Europe and Western Asia.
Perhaps the Europeans applied the name curry to all the spicy preparations that resembled, for the spicy flavor, the preparation that the Indians called kari (that resembled a broth for consistency).

In 1596 Jan Huyghen van Linschoten published a book entitled Itinerario, voyage ofte schipvaert van J.H. van Linschoten naar Oost ofte Portugaels Indien, later published in 1598 translated into English as Iohn Huighen van Linschoten his Discours of Voyages into ye Easte & West Indies. In chapter 48, dedicated to fish and other animals in the seas of India, he writes that most of the fish is eaten with rice on which is put a broth somewhat sour, as if it were soaked in gooseberry or unripe grapes, which is called Cariil. In the Hobson-Jobson A Glossary of Colloquial Anglo-Indian words and phraseswe we find that this is a good description of the ordinary tamarind curry of South India.

Basil Hall, in the Fragments of Voyages and Travels published in 1833, writes that he dares-say that it will surprise most people to learn that the dish we call curry, pronounced Kari from the Indians, is not of Indian, nor, indeed, of Asiatic origin at all. He adds that even the word curry, or kari, is not supposed to be of genuine Indian origin; in short – he says – there is reason to believe that curries were firs introduced into India by the Portuguese; and this view is in some degree supported by the consideration that chilies or capsicums, so invariably one of the most important ingredients, are known oto be natives not of Asia, but of America.

If you liked the article about the recipe for curry, please share it through social media or email. Thank you! You may also be interested in: